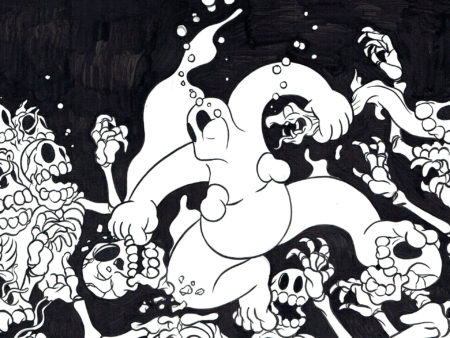 Born in Sunderland in 1987, Andy Barron created the character Om in 2014. Om is an explorer of a fantastical universe filled with cruel judges, sinister monsters and the occasional harmless creature.

A poetic bridge between the works of Jim Woodring and Jeff Smith, these fantastic stories have been written and illustrated by Andy Barron since 2015. His brushwork endows the central character with an unexpected gracefulness.

With his delicate silhouette and his obvious tenderness, Om tries to survive in a cruel world among his alienated or violent counterparts and predators without mercy. A mute metaphor of the fragility of our existence and the preciousness of moments of serenity, Om oscillates between dramatic fable and a quest for a more welcoming world.

You will rapidly realize that Andy Barron’s drawings have a rare elegance and that his strokes restore their cachet to curves.

The original comic book art of Andy Barron is published in the Om anthology.