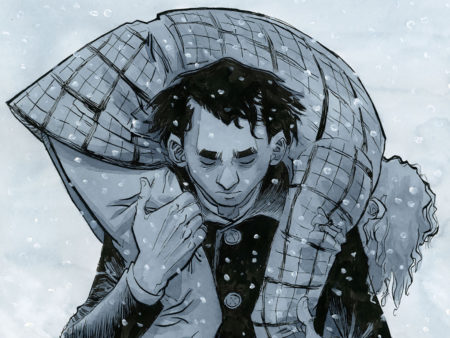 Born in 1981 in Castres, Julien Maffre graduated from the Perpignan Fine Arts School.

Staying in Angoulême, Julien enrolled in the Atelier du Marquis in 2010 where he completed the first two volumes of La Banque (The Bank), with scripts by Pierre Boisserie and Philippe Guillaume. Among his graphic influences are Christian Rossi, Bruno Maïorana, Denis Bodart, Claire Wendling, Hiroaki Samura, Matthieu Bonhomme, Katsuhiro Otomo, and Juanjo Guarnido, as well as classic authors such as Jean Giraud, Hermann and Jean-Claude Forest.

In 2015, he and his script-writing brother Frédéric created the series Stern, an atypical western in which a cultured undertaker with a distaste for weapons makes for an uncommon detective.

The original comic book art of Julien Maffre is published in the western series Stern.