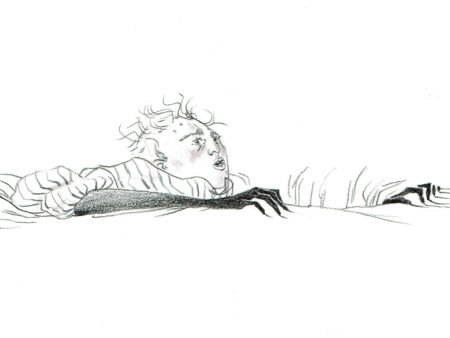 Claire Malary is an author of comics and an illustrator. Born in Rennes in 1989, she studied graphic arts in Paris at the Ecole Supereure d’Art Graphique et d’Architecture, then switched to cooking, her other passion.

After having worked with starred chefs such as Alain Passard and Pierre Gagnaire, she returned to her first love: drawing.

Claire Malary’s first graphic novel, Hallali, was published by L’Œuf in 2018 and won the Artemisia Prize in January 2019.
Her second book, Le desert d’Ata (Ata’s desert), with a script by Mélanie Trugeon was published by Actes Sud L’An 2 in April 2021.

Claire Malary is currently working on her third book, scripted by Tritan Thil, to be published by Futuropolis.

The original comic art of Claire Malary is published in Hallali, and Ata’s desert.