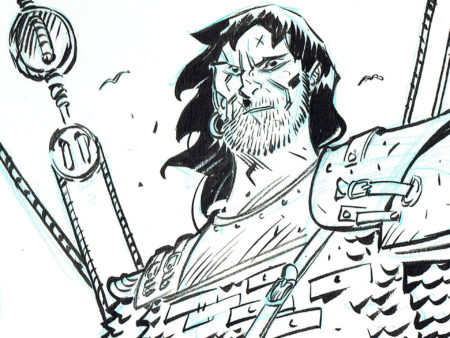 Born in 1970, Pierre Alary enrolled into the Gobelins graphic school in 1991. On graduating, he began his career at the Disney Studios in Montreuil. Over the following decade he worked on Tarzan, Kuzco and The Jungle Book 2. He then left animation to dedicate himself entirely to the comics arts.

The Sinbad series, scripted by Arleston was published by éditions Soleil from 2009 to 2011. Silas Corey, scripted by Fabien Nury consists of 4 volumes published by Glénat between 2013 and 2016. In 2018 he drew the first volume of the Conan the Cimmerian series and with JD Morvan, adapted The Queen of the Black Coast, in which Conan meets Belit. And in 2020, Don Vega, which he created on his own, offered an exciting and exhilarating reboot of the Zorro saga.

The original comic book art of Pierre Alary is published in Sinbad, Silas Corey, Conan the Cimmerian, and Don Vega.