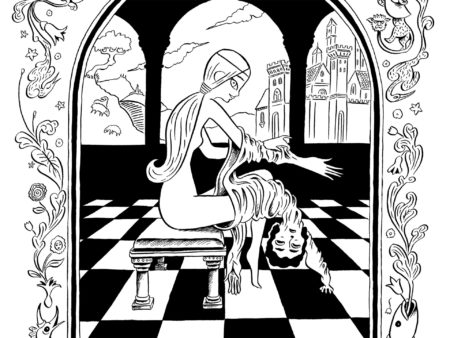 Zanzim was born in Laval January 5th 1972. He contributed to Comics 2000, a collective work published by L’Association and published his album, Les Yeux Verts (Green Eyes) ,with Hubert at Carabas. That was followed by La Sirène des Pompiers (the Firemen’s Siren), Tartuffe, and Ma Vie Posthume (My Posthumous Life). In 2015, Zanzim’s first solo album L’île aux femmes (The Island of the Women) cleverly took apart the myth of the French lover, leaving an unrepentant seducer at the mercy of unaccommodating Amazons.

Published in April 2020 Peau d’homme (A man’s skin), with a script by Hubert, is a story filled with empathy, love and tenderness which skewers the narrow-minded with humor by confronting them with their contradictions. Zanzim’s original panels highlight the fluidity of his narration, which uses a pasteboard Medieval background on which he deftly moves his characters.

A critical and commercial success, Peau d’homme confirms the quality of Zanzim’s drawing which suggests more than it shows. Mischievously and playfully, Zanzim is revealed as one of the most demanding comics art authors.

Peau d’homme isan enormous critical and commercial success with over 150,000 copies sold in France and winner many prizes such as the Grand Prix RTL de la BD, the Landerneau Prize and the Wolinski BD Prize.

The original comic book art of Zanzim is published in Peau d’homme (A man’s skin) and was translated in English by the publisher Ablaze.

Zanzim
A man’s skin
Back cover